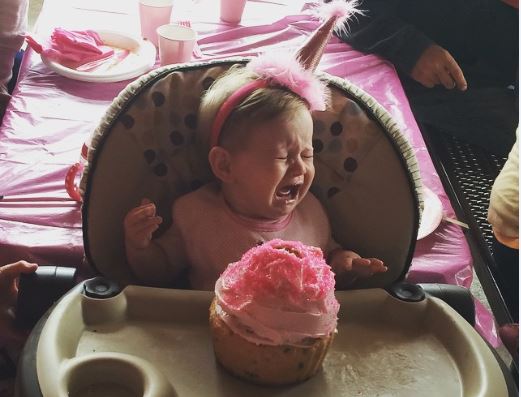 Like going to spin class and owning a ferret, there are certain things in life that sound much better in theory than they are in practice. You do the thing, regret the thing, vow to never do the thing again, and then find yourself fantasizing about the thing and starting the cycle all over again. Women do this all the time with childbirth. I do it with birthday parties at home.

My son’s first birthday is just a month away and I decided to throw him a party, mostly because of second child guilt. There aren’t as many photos or videos of him as there are of his sister. I never sanitized his bottles. He didn’t get the nauseatingly expensive milestone photo sessions, or the hand-painted wall murals, or the new clothes. So I thought, the least I can do is give the poor kid a party. And while it’s still a few weeks away, I’m already finding myself careening through and anticipating the stages of birthday party planning. Nod along if any of this sounds familiar…

It starts out innocently enough – We should throw a party at home, you think to yourself, envisioning idyllic scenes of friends and family chowing down on hamburgers and hot dogs in the sun-dappled backyard while the little ones shriek and run through a sprinkler (which you don’t actually own). It’s cheaper that way, you further rationalize, and it isn’t THAT hard. What’s there do besides a little cooking and some light housekeeping?

In my family, scheduling a home party always coincides with undertaking a wildly ambitious renovation project, especially if there’s not nearly enough time to complete the task before the day of the event. I can clearly picture my parents sanding and staining the living room floor at 3am on the day of my sister’s first holy communion. Before my wedding, my mom ripped out all the carpet in the living room, hell bent on replacing it with laminate before I walked down the aisle. I should mention that neither my wedding nor my reception was actually at her house, but the possibility of people coming over afterwards spurred these ill-advised projects anyway. I remember her tiptoeing down the hall before the sun was up, asking if it was OK to start up the power saw and cut boards yet or if I needed to sleep a little more. On my wedding day.

This bizarre compulsion seems to be genetic. The morning of my niece’s birthday party this year, my sister repainted her entire bathroom. Her hands and forearms were still covered in wet paint when the party started. My own mind is already racing with possibilities for my son’s upcoming birthday brunch. Should I whitewash the fireplace, or re-stain the kitchen table? My options are endless.

I have a theory about why we do this. It’s not like our friends and family haven’t seen our houses in all of their un-renovated glory – but rather, parties are just an excuse to actually get up and do those projects we’ve been putting off for months. How long has my bathroom trim been unpainted? (2.5 years) How long have I been meaning to redo my photo wall? (5 years) It’s easy to put things off until tomorrow, or next weekend, or next month, or next season… but when there’s actually an event on the calendar, suddenly procrastination doesn’t fly anymore. A party date becomes a task deadline – even if it’s irrational and impossible to meet.

Whether you’ve decided to take on renovations or not, home parties always sneak up on you. One week before the event always feels like plenty of time. You might think, I’ll shop on a week night, when it’s not so crowded. It’s not like I need much. Then, on a Thursday night (if you planned correctly, a payday), you’ll find yourself wandering the aisles of the local grocery store, suddenly debating the dietary needs of every person who RSVP’ed maybe. Have we covered gluten free, vegan, nut allergies, and dye sensitivities?, you think to yourself, piling more into your cart than you ever intended. Do we also need party favors, or will people notice if we just hand out leftover Halloween candy? Crap.

The morning of the party is always a lot of fun. Frantic vacuuming, chandelier dusting, floor scrubbing, and tossing unopened bills and toys and shoes into any available baskets around the house, plus yelling at the little birthday boy or girl that they are NOT, under any circumstances, allowed to touch anything. At this point it’s a good idea to give them an unlimited pass to the TV, the iPad, and chocolate chip cookies, or any other unhealthy bribes that might work in your household.

This is also when you’ll prepare the food, which you thought was easy until it actually came time to do it. Cheese doesn’t cut itself, and those adorable mini appetizers all require different cooking times and temperatures. Plus, you’ll need to pick up the cake and any other trays you’ve ordered, assemble favors, set up Pinterest worthy decorations, and oh yeah, probably shower and get dressed.

About 20 minutes before the first guests arrive, it’s time to put down the mop (or paintbrush) and admit defeat. Whatever you got done is done, and the rest will need to wait until next time. There is a relief in this moment, and in the realization that it will all be over soon. For the 400th time in 24 hours, you will say aloud, “Why did I think this was a good idea?”

During the party, as you observe party guests grinding cake crumbs into your freshly steam cleaned carpet and little children yanking on your new handmade and freaking ironed living room drapery, you will regret everything. You will despise birthdays, and parties, and houseguests, and crumbs, and unruly children. You will see your birthday child’s face light up when everyone is singing and you will be happy for approximately 3 seconds before getting irrationally angry that no one noticed how you repainted all the baseboards in the entire house.

At the bitter end, when you close the door behind the last guest and survey the wrapping paper and red Solo cup strewn landscape, you will turn to your significant other and sigh as you chug your last swig of lukewarm party punch.

“We are NEVER doing this again,” you’ll say firmly.

And that will be true… until next year.